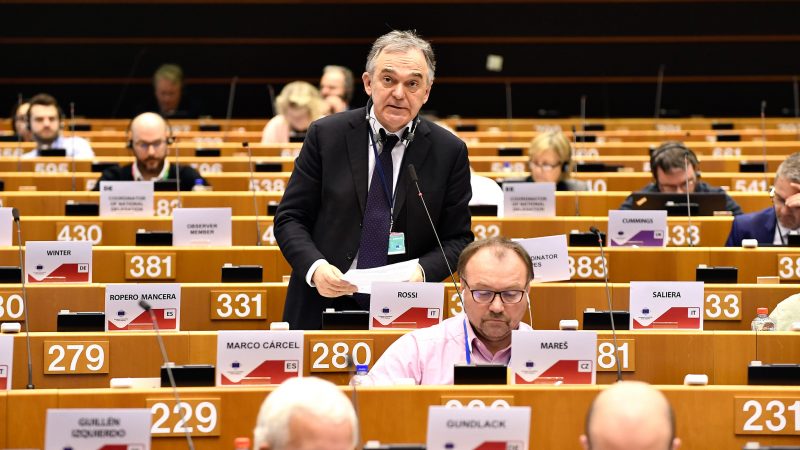 Enrico Rossi, President of Tuscany Region, addressing the plenary of the Committee of Regions. [EU/GUERDIN]

The seriousness of the coronavirus outbreak makes hefty cuts to cohesion policy in the EU’s next long-term budget all the more unjustified, writes Enrico Rossi, the governor of Italy’s Tuscany Region.

Enrico Rossi is President of Tuscany Region and vice-president of the Conference of Peripheral and Maritime Regions.

The novel coronavirus (COVID-19) outbreak is a test of unprecedented magnitude for the EU which will define its future. Whether for better or worse depends upon the capacity to provide a concerted and timely response to the multiple challenges posed by this global crisis.

The seriousness of the situation requires the adoption of exceptional measures by Brussels. The principle of solidarity on which the European project is built on should prevail over national interests.

A stronger EU is key to address the health emergency and the economic shock that is bringing about. The first signs are positive although there is much more to do.

In the past days, the European Commission presented a series of extraordinary measures to support the member states, including a considerable relaxation of state aid provisions and of the economic governance framework.

A key element of this package is the “Corona Response Investment Initiative” which consists of the mobilisation of existing cohesion policy allocations.

More specifically, member states will be given the flexibility to quickly (re)-direct these resources towards fighting the crisis, be it to support hospitals or help to struggle small and medium-sized enterprises (SMEs) and protect jobs.

No cuts to cohesion

Cohesion policy is the main investment policy of the EU providing support to all regions across the continent.

It addresses a wide range of priorities, including giving support to the health systems. The package adopted by the Commission is yet another proof that this policy has a fundamental role to play in tackling most of the challenges, including emerging or unpredicted ones, facing the EU.

This makes all the more unjustified the hefty cuts proposed to its budget in the framework of the negotiations on the next EU long-term budget, the Multiannual financial framework (MFF) for 2021-2027.

The reasoning of some national governments supporting the cuts goes that cohesion funding should be reduced in the future to make space for programmes addressing new priorities.

However, this argument is utterly fallacious. Cohesion policy is very instrumental in delivering on the future agenda of the EU.

The ‘Corona Response Investment Initiative’ goes in the right direction but it relies on using existing resources, most of which are already committed to other projects.

The scale of the emergency demands an extra effort, namely through the mobilisation of fresh funding.

The current budget of the EU offers some room for manoeuvre that should be exploited with no hesitation. But if necessary we should not refrain from reinforcing the present financial framework.

This is not the time for fiscal restraint. We expect the European Council to come forward with bold proposals to support the economy.

But it would also important that Member States look at the long-term challenges.

Many European regions will have to cope for a long time with the economic and social fallout of the COVID-19 emergency amid the risk of a sharp decline in public investment.

Cohesion policy will offer them a key tool to mitigate these negative effects, much like it did throughout the financial and economic crisis in 2008.

That is why we cannot allow ourselves the luxury of delaying the implementation of future cohesion programmes due to persisting disagreements among member states on the MFF 2021-2027.

A disruption of programmes between the two programming periods will have a ruinous impact on national and regional economies already hit hard by this major crisis.

A swift agreement on an ambitious MFF ought to be part of the response to the COVID-19.

If a deal on the MFF cannot be found, the Council should quickly adopt a contingency plan prolonging the current programmes to 2021 with fresh funding as it was requested by the European Parliament.