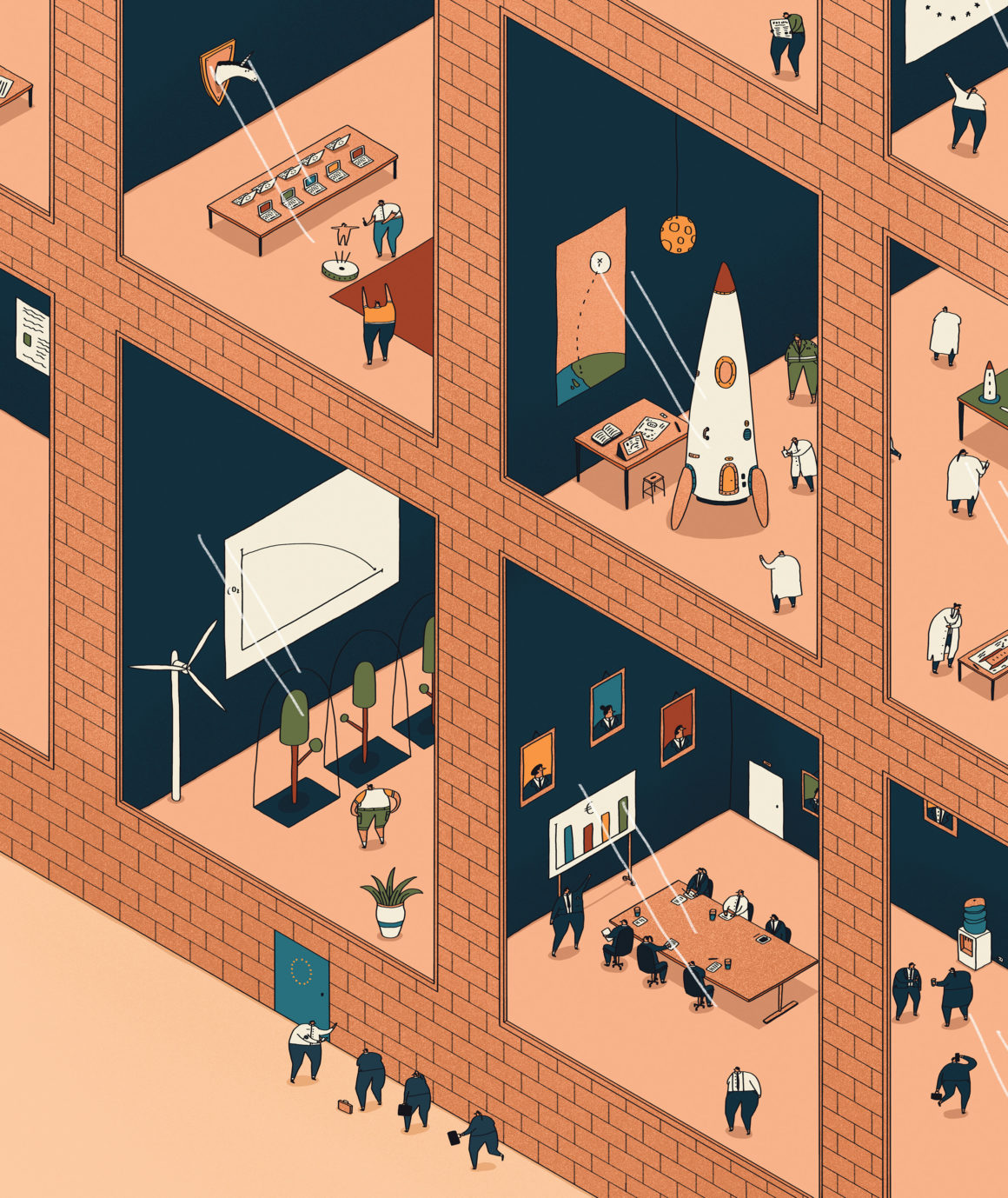 The next five years of EU policy will be about defending the bloc’s interests.

After decades of championing the dissolution of barriers and borders, Europe is battening down the hatches.

Ursula von der Leyen has set herself a monumental task for her European Commission presidency: Make Europe stronger on the global stage. Call it “European Sovereignty,” call it “Strategic Autonomy,” call it “Une Europe qui protège” — what it will be is an effort to shore up European interests against foreign pressure and competition.

Welcome to the new era of European protectionism. POLITICO looks at four key areas affected by the new mood.

The EU’s protectionist turn is likely to be most visible in the trade arena, where the bloc is preparing to become more assertive.

For years, the European Commission tried, in vain, to get U.S. President Donald Trump to heed the World Trade Organization’s rulebook for multilateral trade as he waged an aggressive tariff war.

No longer. The EU executive has moved to arm the bloc with tougher sanction powers to respond with more force to potential new U.S. tariffs, for example against European cars.

Von der Leyen has also pledged to appoint a chief trade enforcer for the bloc, who can actively launch anti-dumping cases against foreign countries that undercut European competitors with unfair subsidies and pricing.

Another weapon in the EU’s arsenal is Phil Hogan, the new trade commissioner. In his parliamentary hearing in September, the Irishman said he would tighten investment screening mechanisms so as to block foreign takeovers of European companies, namely by Chinese entities, if the targeted companies are of strategic importance or the purchase is facilitated by unfair subsidies or state money.

As part of a one-two punch alongside a harder stance on trade policy, the Commission president has also pledged to boost Europe’s industrial and digital sector.

Von der Leyen has given the portfolio to France, the country that has argued most forcefully for the need for “European champions” to compete with more powerful foreign companies. Paris has also called for an overhaul of competition rules to better respond to new challenges, such as market-distorting subsidies in China.

To avoid being swallowed by Chinese or U.S. companies with more firepower, the Commission has said it wants to help local outfits compete with the likes of global powerhouses like Amazon, while also supercharging European innovation in areas such as artificial intelligence.

As part of that push, Von der Leyen will also boost the EU’s regulatory powers when it comes to the digital world and industrial policy, and has appointed a tough enforcer to the role: Executive Vice President Margrethe Vestager, the Danish official who has led high-profile investigations and fines against Big Tech for the past five years.

Donald Trump’s fixation on Europe’s military spending and his hot-and-cold relationship with NATO have thrown the EU’s comfortable reliance on the U.S. into question.

If the bloc can’t match the U.S.’s military might, it can at least make itself less reliant on its leader’s whims. That’s the plan, anyway.

The new Commission has pledged to shore up the EU’s defense capabilities and created a brand-new Commission directorate general to oversee defense and space policy. The goal is to build on the momentum of the previous Commission, which set up a military pact known as PESCO, which includes 25 EU members.

Proposed defense spending in the next seven-year EU budget includes €13 billion for a European Defence Fund to cover research and development. On top of that, EU members have earmarked another €10.5 billion to fund potential military operations. Because the treaties don’t allow for the use of common EU money for military interventions, that money would come from the so-called off budget — a pot of money outside the formal budget, where governments pitch in and make their own rules.

Despite the spending boost and von der Leyen’s experience as Germany’s defense minister, nobody expects the EU to turn into a military superpower any time soon.

That’s not the intention, at least for now. The Commission’s efforts are a signal to whoever’s watching that the EU can play its part and is willing to invest to give itself more leverage over unpredictable partners.

The challenge will be ramping up EU policy to fight climate change without unleashing global retaliation.

Proposed tools such as a carbon border tax — EU tariffs on imported goods based on their CO2 footprint — could be seen as a protectionist measure and a violation of World Trade Organization rules, for example.

Von der Leyen has insisted measures to make the bloc climate neutral are “a long-term economic imperative.” Making the most of the opportunities of the ecological transition requires the EU to act “first and fastest.”

Besides the carbon border tax, ongoing efforts to boost the role of the euro in global transactions — including in energy payments — are also meant to help the bloc become the world’s green growth champion and force others, especially economic competitors, to follow suit.

“As an economic giant we have tremendous leverage in our trade relations,” Frans Timmermans, the Dutch Socialist tasked with making good on the plan to make the EU climate neutral by 2050, said during his confirmation hearing in the European Parliament in October.

Tools like the carbon border tax, he said, are “instruments … to level the playing field for European products if other countries do not go as far as us or refuse to go in the right direction.”