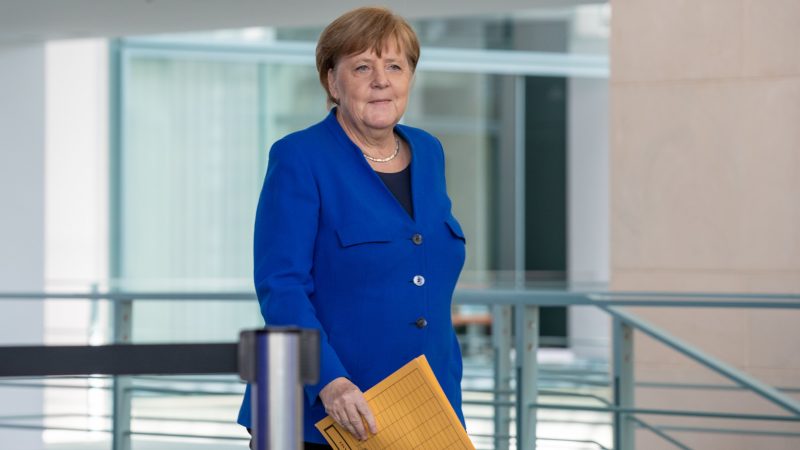 German Chancellor Angela Merkel signalled readiness on Monday (20 April) to finance economic recovery in Europe from the coronavirus pandemic through a bigger European Union budget and the issuance of joint debt via the European Commission.

EU leaders are to discuss the heated topic of jointly issued debt at a videoconference on Thursday. The idea around which a compromise may emerge involves the European Commission borrowing on the market against the security of the long-term EU budget and leveraging the money to achieve a bigger effect.

Asked if she backed proposals to help fellow EU countries hardest hit by the pandemic such as Italy and Spain via the EU budget and the issuance of EU bonds, Merkel said an EU treaty article already allowed such action and that it was used to finance a European short-time work scheme.

“I can imagine such instruments further down the line,” Merkel told a news conference in Berlin, adding: “More generally I would like to say that Germany not only wants to act in solidarity, but that it will act in solidarity.”

Merkel insisted that this act of solidarity would have to happen within the rules of existing European treaties, and repeated her mantra that Germany’s well-being depended on the well-being of its European partners.

“Of course it must be kept in mind that all countries, all member states of the European Union got into this situation through no fault on their own. This is a pandemic,” Merkel said.

So this crisis was not a result of national failures in fiscal policy or other homegrown decisions, the conservative leader of Europe’s biggest and most affluent economy added.

The EU leaders discussed several proposals but it remained unclear if they were able to narrow their differences about how to finance the economic recovery after the coronavirus pandemic.

During the news conference, Merkel said the next EU budget would look very different and bigger than that which was discussed before the outbreak of the coronavirus pandemic.

She even suggested that Germany was open to amendments to EU treaties if that would expedite measures to restore economies, but she warned that such a process would take too much time.

“One can discuss new treaties but this would take two or three years to find solutions,” Merkel said.

“We’ll need quick answers to address this pandemic and Germany will participate in answers of solidarity that go beyond the 500 billion euros that we already have,” she said in reference to the volume of an aid package agreed by European finance ministers earlier this month.

Lucas Guttenberg, a political analyst from the Jacques Delors Centre in Berlin, said Merkel’s statement was significant as it could help pave the way for a compromise deal among EU leaders during their videoconference on Thursday.

“Of course her statement is leaving open the question whether the European Commission should pass on the money to member states as loans or grants, but it’s still significant,” Guttenberg added.

“I’m not saying this is enough, but it’s an openness that was just not there so far and shows that things are in flux.”