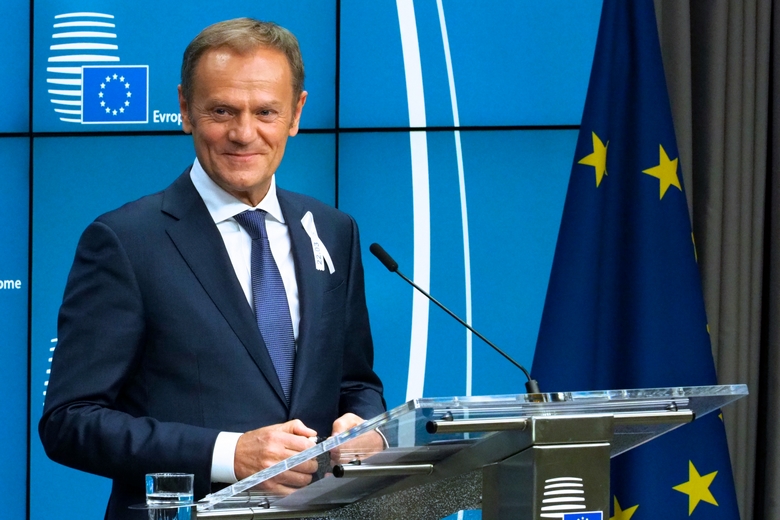 European Union President Donald Tusk said he has “different views” from U.S. President Donald Trump on trans-Atlantic relations and other elements of geopolitical order, pushing back after the American leader’s latest criticism of Europe.

Tusk’s remarks came after Trump called “very insulting” comments by French President Emmanuel Macron that a “strong and sovereign Europe” was needed to defend its interests against China, Russia and “even the U.S.” Macron moved to smooth relations at a meeting with Trump in Paris on Saturday.

“For the first time in history we have an American administration which, to put it delicately, is not very enthusiastically tuned in to a united, strong Europe,” Tusk said in a speech in Poland on Saturday. “And I’m talking here about facts, not about propaganda statements,” he said.

“I have no doubt whatsoever that in those matters which — in my view — are the geopolitical foundation of Poland’s independence, namely a strong European Union, close integration between Europe and the United States, even closer than today, and the trans-Atlantic community, which is the essence of the global order, I have no doubt that with regard to all of this I have different views from my most influential namesake in the world,” Tusk said.

France’s Macron also drew a distinction with Trump at a ceremony in Paris on Sunday commemorating the centenary of the end of World War I. “Patriotism is the exact opposite of nationalism; nationalism is a betrayal of patriotism,” Macron said. Trump said in September that he is a “nationalist” who rejects globalism.

Tusk on Saturday warned that nationalist sentiment will lead to a “fundamental threat” in the EU as the bloc prepares for legislative elections next year.

“I am talking here about the rise of nationalism and anti-European, not only rhetoric, but also anti-European emotion, in many European capitals,” he said. “This does not yet apply to today’s leaders, but these forces are growing before our very eyes. They are forces which back conflict rather than cooperation, disintegration rather than integration,” Tusk said.

Saying the rise in nationalism “is illustrated most clearly by Brexit,” Tusk said it is up to ordinary citizens “whether politicians will bring about the break-up” of the EU. “It depends on us what happens in this lunatic parade — and I am using this expression intentionally — which began a few years ago in the United Kingdom. I talk about a lunatic parade because I’m thinking back to Prime Minister Cameron who in his opinion did everything he could to keep the United Kingdom in the European Union, but in actual fact did everything he could to make the United Kingdom leave the European Union,” Tusk said.

“In a few months’ time, we will be electing the parliament in Europe,” the EU president said. “It cannot be ruled out that two political currents might occupy very powerful positions in that parliament: one, increasingly brown-shirted, unambiguously anti-European, looking more and more clearly towards nationalism, working against the European Union as such. The other current belongs to those who want to integrate the European Union as much as possible,” he said.

EU political parties are maneuvering in preparation for the May 2019 elections to the European Parliament amid a populist surge that could affect the direction of the bloc. In addition to electing EU lawmakers, the results also will affect the appointment of the European Commission president, who leads the bloc’s executive arm in Brussels.